2021 VALORANT Strike Arabia MENA is Riot Games’ second VALORANT esports event, a year-long event crowning regional champions across the world and paving the way for players to participate in the VALORANT Champions Tour.

The 2021 VALORANT Strike Arabia Tournament is open to 15 countries, divided into their respective sub-regional tournament as follows:

The Strike Arabia League will have three seasons in the 2021 competitive roadmap. Seasons 2 and 3 will be held under the Summer Clash logo, yet will have the same rules and regulations as Season 1.

Season 2 will be divided us follows:

In the event of the registration of 128 teams, they will compete in a single round robin on the basis of Best of One (Bo1). The teams will be divided into 16 groups and the top two teams from each group will advance to Split 2, for a total of 32 qualified teams.

The 32 teams that advance from Split 1 will compete in a single round robin on the basis of Best of Three (Bo3). The 32 teams will be divided into 8 groups where the top team from each group will advance to the finals, for a total of 8 qualified teams.

As for Season 3, the format will be the same, yet the dates will be as follows:

After the end of each season, points will be awarded to the top 8 teams depending on their placement on the Leaderboard, and these points will add up as we move forward with each season. 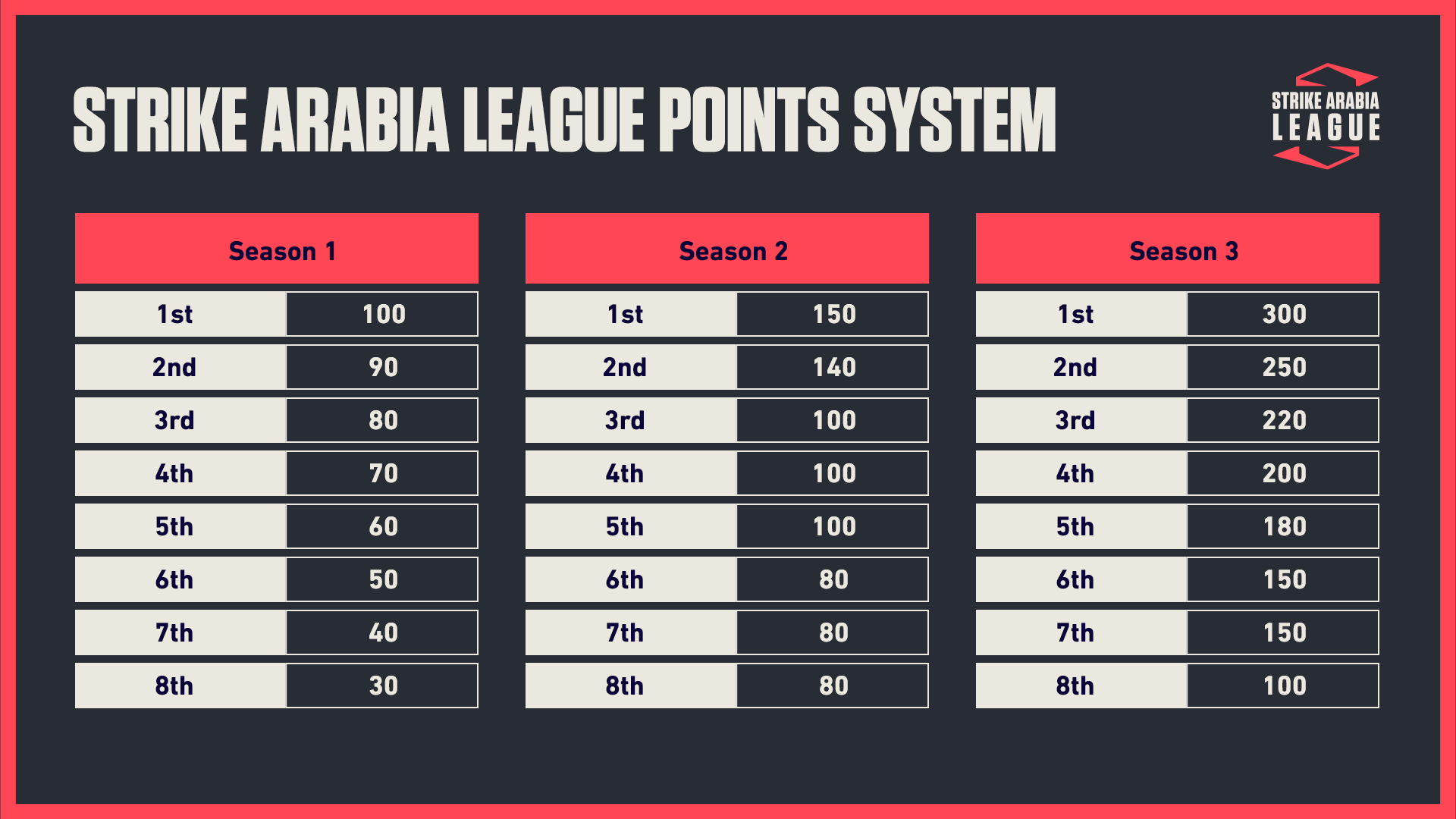 2.2.1. In case of a tie between two teams in the same group, the previous head-to-head match between those two teams will be the decider of the qualified team.

2.2.2. In case of a 3-way tie, if one of the three teams previously won head-to-head matches against the other two teams they will be the team that qualifies to the next stage.

2.2.3. In case of a 3-way tie with no team winning in the head-to-head matches against the other two teams, a coin toss will grant a bye to one of the 3 teams and the other 2 teams will face each other in a Best of 1 match. The winner will face the team that has received a bye in a Best of 1 match to decide which team will advance to the next stage.

No player shall be considered eligible to participate in any Match comprising a 2021 VALORANT Strike Arabia MENA event before his or her [16th] birthday, deﬁned as having lived [16] full years.

Players - main players and substitute players - must be residents in one of the 15 participating countries:

4.1.1. Each of the three sub-regions shall have a registration limit of 128 teams.

4.1.2. Teams participating in 2021 VALORANT Strike Arabia MENA may not add or drop players from their roster at any point after the end of the each registration period.

4.1.3. Each team captain must create an account on Toornament, then register their team on the 2021 VALORANT Strike Arabia MENA website using the same email they used for the Toornament account.

4.1.4. Players may be of any rank at the time of registration.

4.1.8. The proposed team name entered upon registration may be in English or Arabic; however, it may not be offensive, racist or sexual in nature. If found to be in violation of this rule, the team will be disqualified

4.1.10. Changes made to any kind of information in your registration application are prohibited after the registration period closes on the 26th of August. Any attempt to modify information will automatically disqualify your team from the tournament.

In the event of an emergency at any point during a match, a team will be given up to ten minutes to produce an eligible Substitute on-site. If a replacement cannot be found then the team will forfeit. Tournament oﬃcials will determine if an incident qualiﬁes as an emergency. Any substitute must be a member of the team roster.

For online tournaments held as part of a 2021 VALORANT Strike Arabia MENA event (“Online Events”), at least one of the team’s designated coaches may be connected to the voice communication system in the lobby and will only be allowed to talk to players and others during the Agent and Map Selection process for each match, timeouts, half-times and in between Maps (if applicable).

“Admins” are tournament officials who work on behalf of the Tournament Operator and are subject to the direction, review and oversight of the Head Admin. Tournament admins shall be entitled to:

All decisions regarding the interpretation of these rules, player eligibility, scheduling and staging of the event, and penalties for misconduct, lie solely with the Head Admin, the decisions of which are final. Head Admin decisions with respect to these Rules cannot be appealed and shall not give rise to any claim for monetary damages or any other legal or equitable remedy.

Matches will be played on the current patch available on VALORANT’s live service.

New Agents will be automatically restricted for two weeks from their release on live service.

New Maps will be automatically restricted for four weeks from their release on live service.

Additional Restrictions (e.g. disabling certain weapons) may be added by Riot representatives at any time before or during a match, if there are known bugs with any items, Agents, skins, or abilities.

It is expected that players will resolve any issues with the setup process within the allotted time and that the match will begin at the scheduled time. Sanctions for tardiness may be assessed at the discretion of Tournament Admins. All teams and players must follow the schedule time set on the Toornament site for each bracket.

For Online Matches that are part of a 2021 VALORANT Strike Arabia MENA event Players will be expected to confirm readiness at a time specified by Tournament Adminss prior to each match. Players are responsible for ensuring the performance of their chosen setup, including computer hardware and peripherals, internet connection, DDOS protection and power. Issues with this setup are not an acceptable reason for lateness or pausing beyond a Team’s allowance.

5.4.1. Players must search for the Riot IDs of their opponents from their upcoming matches on the Toornament site, or in the sheet that will be provided by Tournament Admins.

5.4.2. Team captains must use the Toornament site lobby in order to communicate anything related to their match (for example, map & side selection).

5.4.3. Team A captain must follow the Lobby settings when creating the Lobby.

5.4.4. After the two team captains confirm their readiness, the Lobby owner can start the match.

5.4.5. Each team must be in the Lobby within 15 minutes from the official time of each match as scheduled on Toornmanet. Failure to do so shall entitle the Tournament Admin to disqualify the team for their tardiness.

The official Match lobby will be set to “Tournament” mode with “Overtime: Win by Two” turned on.

No observers other than Tournament Admins may enter the lobby.

The map pool consists of Bind, Haven, Split, Ascent, and Icebox. Any additional maps released in-game will be added to the 2021 VALORANT Strike Arabia MENA map pool in accordance with the New Maps condition.

A match will start immediately after the Agent/Map Selection process is complete, unless otherwise stated by a Tournament Admin. Players are not allowed to quit a Map during the time between the completion of picks/bans and Map launch, also known as “Free Time.”

If a game crash, disconnect, or any other failure occurs which interrupts the loading process and prevents a player from joining a Match upon its start, the Match must be immediately paused until all ten players are connected to the Match.

Restrictions may be added at any time before or during a Match, if there are known or suspected bugs with any Agents, skins or maps, or for any other reason as determined at the discretion of Tournament Admins.

For Matches involving more than one Map (i.e., a best-of-three or best-of-five Match), a Team may replace their then-current Starters with Substitutes in between Maps, provided that the Team informs the opposing Team and receives approval from the admins of such substitution no later than five minutes after the conclusion of the previous game. In the event that a Player disconnects during a map and is unable to return within the allocated pause time, the Team will be permitted to replace them with a Substitute from their Roster. Any substitutions must result in the Team having an eligible Roster or Starting Lineup.

Teams are allowed to call Timeouts of 30 seconds in duration one time per map. Timeouts can be called via the in-game pause system.

Every team has a maximum of 10 minutes of pause time per match.

Pausing beyond allowance-time will be considered unfair play and match must be unpaused. If a team disregards the pause allowance rules, contact an admin immediately via our channels on discord.

Any crash, bug, or disconnection that happens during the agent selection or during the game must be reported with valid supporting proof. The admins will review the report and proof provided and will make the decision of either continuing the game or remaking it depending on the situation.

6.1.1. Team captains must report their match results after each match and contact one of the Tournament Admins to make sure that the right result is confirmed.

Players will identify any technical issues with Tournament Oﬃcials.

For online events, the standard time for transition in between Maps is maximum of ten (10) minutes from the time of the last Map’s Round.

Matches won by forfeit will be reported by the minimum score it would take for one Team to win the Match (e.g. 1-0 for best-of-1 Matches, 2-0 for best-of-three Matches, 3-0 for best-of-ﬁve Matches). No other statistics will be recorded for forfeited Matches.

To ensure that match results are updated correctly and prevent any issues with upcoming matches, team captains are required to follow the steps below:

6.5.2. Login with the account used to register the team.

6.5.3. Select “My Matches”, then select the match that was just played.

6.5.4. Click “Report” and fill in the results of the match, while adding any notes (if any) for the admins to review.

6.5.5. A screenshot must be attached as a proof in the results reporting page (mandatory).

Instructions from the Toornament site can be found HERE.

Note: In case of any problems while reporting the results, captains are required to contact a Tournament Admin on Discord immediately.

Foul language, offensive and disruptive behavior, and disregard to the pause allowance rules will not be tolerated from any player and will result in one of the following penalties:

In extreme cases of foul language or offensive and disruptive behavior, the team or player will be disqualified or banned immediately by the Tournament Organizer.

During the 2021 VALORANT Strike Arabia MENA competition, teams shall have the opportunity to earn prize money based on their level of performance in the event.

8.1.1. The prize pool for each season of Strike Arabia Championship shall be $12,000, divided equally among the three regions, i.e. each region shall have a prize pool of $4,000 per season.

8.1.2. The prize pool of each region shall be divided among the top three teams as follows:

8.2.1. The prize pool for each season of Strike Arabia League shall be $6,000, divided equally among the two regions, i.e. each region shall have a prize pool of $3,000 per season.

8.2.2. The prize pool of each region shall be divided among the top three teams as follows:

The prize pool of the Strike Arabia Grand Finals shall be $50,000.

The prize shall be disbursed to the player or person representing the entire team, given that the identity of the representative shall be decided upon among the players

9. COMMUNICATION WITH THE TOURNAMENT OPERATOR

Team members can contact the Tournament Operator at [DISCORD SERVER FOR VALORANT] for all communication and support. Team captains must join the 2021 VALORANT Strike Arabia MENA discord server and contact one of the available admins with the following:

These rules may be amended, modified or supplemented by Tournament Organizer, from time to time, in order to ensure fair play and the integrity of the 2021 VALORANT Strike Arabia MENA Roadmap.